What happens to our brains ‘on art’? New studies—often backed by brain imaging technology—are beginning to dial in on the answers. 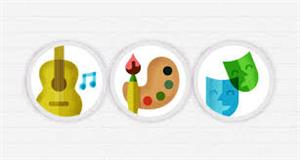 New research reveals that the arts may prime our neural circuitry for a broad range of activities, boosting crucial cognitive and social skills like spoken and written language, focus, self-control, and empathy. In a 2016 study, for example, T. Christina Zhao and Patricia Kuhl demonstrated that babies exposed to simple melodies in a social setting developed a greater sensitivity to the rhythms of spoken language. More surprisingly, they noted, the processing of music was traced not just to the auditory cortex of the infants, but to the prefrontal cortex as well—the seat of higher-order cognitive faculties like attention and self-regulation.

“We can see that the babies who have been through the music experience have greater abilities to...hold attention when that’s important, and to switch attention when it’s  appropriate to switch,” Kuhl explained in a TED talk. “In other words, music is affecting executive function.”

A 2019 study reached similar conclusions with professional musicians, finding that “executive attention is more efficient in musicians than non-musicians,” and improves as musical training progresses.

But those weren’t the only surprises in store for researchers. A major 2019 study tracked over 10,000 students in Texas as they participated in arts programs, concluding that they performed better on state writing tests, were better behaved, had more compassion for fellow students, and were more engaged in school. And a 2018 study showed that drawing had a dramatic effect on memory, outperforming writing, visualizing, and other retention techniques.

We also referenced other studies, reports, and news stories as we produced this video: A comprehensive 2017 American Institutes for Research study on arts integration; 2016 and 2014 research on executive function; a 2013 study on the value of field trips to museums; a 2019 news story on the recent discovery of ancient cave paintings; along with the following older research: a 2009 report; this 2011 research; this 2008 research; and this 2004 research, among others.

You are commenting as Anonymous

You can add a copyright statement or legal disclaimer in this area if necessary.
Copyright © 2002-2020 Blackboard, Inc. All rights reserved.