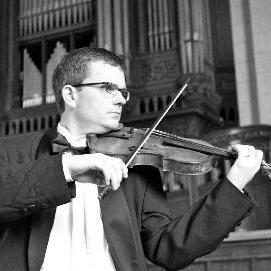 Mr. Harper's musical education started at the age of three as a Suzuki violin student in Ithaca NY. He holds a Bachelors degree in music education and violin performance from the Crane School of Music at SUNY Potsdam NY, where he served as a concertmaster of the symphony orchestra and a Masters degree in violin performance from the University of Oklahoma.

A long time passionate student and performer of chamber music John as coached with members of the American, Audubon, Borromeo, Lark, Lydian, Miami, Pacifica string quartets as well as the Triple Helix Trio. Mr. Harper performs in a string ensemble for many events throughout the greater New York area, and has played professionally throughout New York and Oklahoma.

Currently Mr. Harper is an orchestra teacher in the Arlington School district where his orchestras have consistently been awarded the highest possible ratings at state sponsored music evaluations, and also maintains a private studio in which his students have participated and won local competitions. Before moving to the Hudson Valley he was a violin instructor at the Oklahoma City University Performing Arts Academy.